An Overview of Biden's Immigration Plan 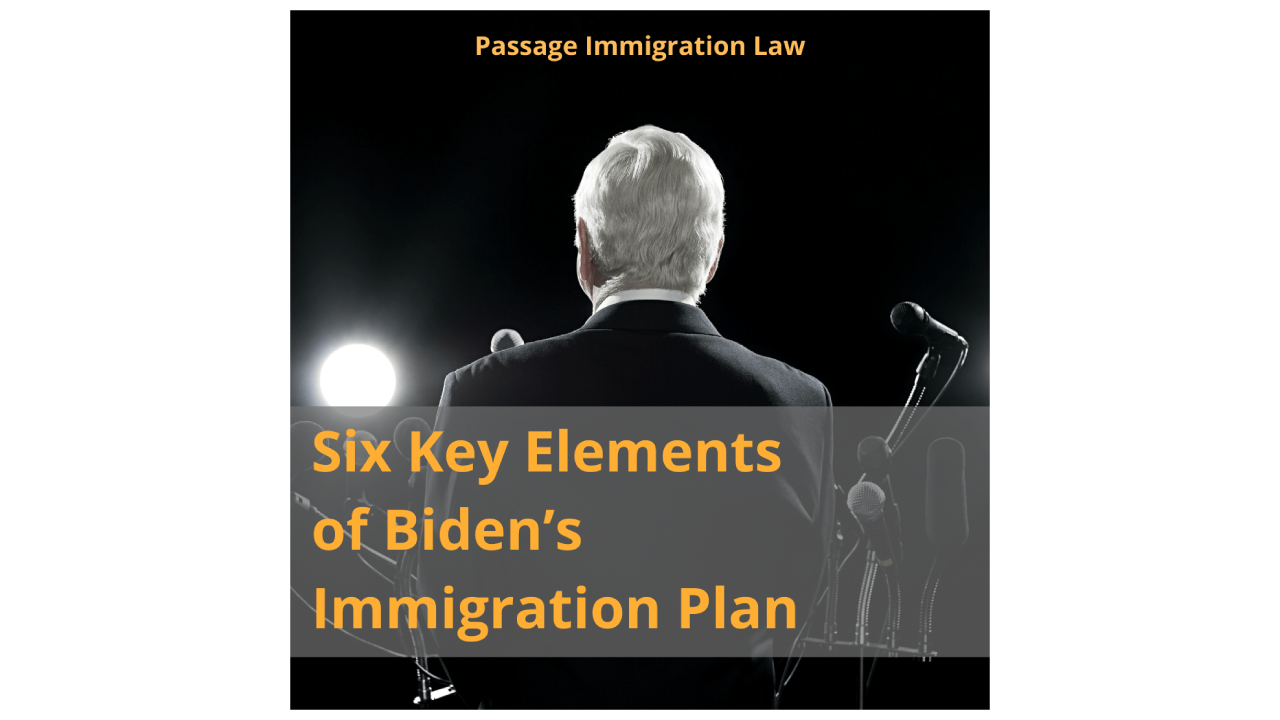 President-elect Joe Biden will not be taking office until January 2021 but he has already provided extensive details of his plans to change the U.S. immigration system. The U.S. President is able to act quickly in certain areas and make immediate changes. However, there are quite a few areas where he will need the help of Congress before he can act. Here is a breakdown of the six main areas Biden has pledged to target once he becomes President.

Biden was vice-president when President Obama first initiated Deferred Action for Childhood Arrivals (DACA). This program provides work authorization and a type of legal status to those who arrived in the U.S. when they were young – often brought by their parents. Quite a few DACA holders arrived in the U.S. with valid visas but simply never left and became undocumented. Although President Trump took all possible steps to cancel DACA and fight it in the courts, Biden has pledged to immediately bring it back soon after he takes office. This is great news for those who have lost work authorization or have never applied for DACA due to fear of coming out of the shadows. Resurrecting DACA will not require Congress to act and so a President Biden could move forward rapidly on his own.

In addition, Biden’s immigration plan calls for removing the changes President Trump made to Temporary Protected Status (TPS). This program exists in order to provide essential help to immigrants unable to return home due to serious problems like natural disasters or civil war. The Trump administration systematically dismantled TPS, taking away this option hundreds of thousands of immigrants who cannot return home. In contrast, President-elect Biden has recognized the critical importance of this program and has committed to building it back up. Expect to see thousands of families benefit and avoid unnecessary suffering through forced removal from the U.S.

President Trump has issued multiple Presidential Proclamations that restricted travel into the U.S. for those from certain countries. The immediate pattern that jumped out was that all of the original countries on the ban were Muslim.

After lawsuits challenging these travel bans made some headway, the restrictions were adjusted to also include some non-Muslim countries so as to help dilute their unconstitutional nature. Overall, however, the U.S. Supreme Court has been largely deferential to the President regarding his ability to control who can enter the country. Indeed, courts have repeatedly given great leeway to the U.S. President to control the U.S. border in the interests of national security.

However, President Biden has repeatedly said he plans to scrap Trump’s travel bans and argues they have been ineffective as a security measure. Their only effectiveness has been as a tool to discriminate against a particular religion.

The U.S. immigration system is infamous for inflicting pain on families who have to endure long separations from one another. The system is also mind-numbingly complex with contradictory regulations that make tax law look crystal clear in comparison!

A key change that President-elect Biden plans to propose to the family-based immigration system is to expand the definition of “immediate relative.” Family members who qualify as “immediate relatives” are able to immigrate much faster to the U.S. than those who are not, who are placed into “preference categories” on the visa bulletin.

Therefore as a way to cut down on the stress and suffering that comes from family separation, Biden is advocating that unmarried children and spouses of green card holders would become immediate relatives under U.S. immigration law.

Over the past several years, the U.S. has become outright hostile to foreign workers. It has become especially difficult to receive any kind of employment-based visa and both U.S. companies and qualified foreign nationals are harmed by this.

In fact, many companies are sending workers to Canada rather than the U.S. in order to avoid getting stuck in the morass of the U.S. immigration system.

President-elect Biden has described wanting to change this hostility to foreign workers and has proposed several intriguing new policies. One of his proposals is to allow U.S. cities and counties to petition – just as U.S. companies can file petitions – for foreign workers. The idea behind this policy change would be to directly enable growing cities and localities to secure the labor talent they need to thrive.

Our high tech companies in particular cannot find all of the talent we need from American-born workers. We certainly should welcome the hiring of amazing foreign nationals who could turn out to be the next Sergey Brin or Elon Musk.

The U.S. immigration court system is a nightmare of Kafka-esque proportions. The wait time for most hearings is years away. The courts themselves are not sufficiently independent because they are part of the U.S. Executive Branch (Department of Justice) rather than the U.S. Legislative Branch. This results in many unfair decisions and a “rubber stamp” quite often when appeals are sought.

The most immediate, and genuinely essential, improvement to the immigration court system would be to dramatically increase the number of judges who serve. This would help decrease the outrageously long wait times immigrants have to endure for a hearing. President-elect Biden has proposed doubling the number of immigration judges available and this could not happen a moment too soon.

In addition, a crucial change that will eliminate extensive physical and psychological suffering would be to end the for-profit detention of immigrants. The living conditions of thousands of men, women and children in these for-profit detention centers has been repeatedly shown to be unacceptable and unhealthy. Bipartisan experts have pointed out that focusing first on minimal quality standards of care for those in detention, rather than profits, is required to stay true to the American value of decency.

Perhaps the strongest example of an aggressive immigration policy that only hurt the most vulnerable and deserving of help has been how the Trump administration has treated refugees and asylum-seekers.

Yes, the U.S. certainly cannot take all of those seeking asylum across the globe and many of the applicants simply will not meet the stringent standards to qualify. However, with millions of displaced and suffering people across the world needing assistance from wars and persecution, it is shameful that we dropped the number of refugees we would accept down to only 15,000. For decades our nation has accepted well beyond this number and most recent in prior administrations we accepted around 100,000 people a year.

President-elect Biden has indicated he would set the refugee quota at 125K upon resuming office. This will also be a very welcome change and we as hospitable Americans are definitely up to being good hosts. Not only will this increased number of refugees bring needed manpower for jobs, they will enrich us culturally, including new recipes for delicious food.